Over the last decade on the professional front I’ve created my fair share of screen cast
videos with voice over for a variety of eLearning programs and provided script or other input for a handful of live videos. Traditionally, I’ve shied away from live videos unless in was a true necessity because of the rather large costs involved.

In my personal life over the same 10 or 15 years, I’ve seen the video cameras I’ve owned go from a clunky unit that weighed several pounds with fairly low quality, to a smaller, more streamlined unit, to a combination digital still and video camera, to just one of the many things we can do in fairly high quality with the smartphones in our pockets. Not only that, but we can shoot a video on the fly and have it uploaded to YouTube or Vimeo to share with the world in mere seconds.

For some training or eLearning programs, that type of video might be appropriate, but generally I think the preference is for high quality edited video with good lighting and sound, whether that is audio recorded with the video or added later as a voice over. Until the last few years, that often meant hiring specialists to light, shoot and edit the video. Now those lines have blurred. Low cost equipment is now available that can produce high quality results. Editing software is readily available and much more intuitive than it used to be. In short, amateurs with a little money, and some practice and good planning, can produce the videos they need for their training and eLearning programs.

At the eLearning Guild’s DevLearn conference a few weeks ago, I attended a session that opened up even more possibilities in my mind for producing training videos. The session looked at how GoPro cameras could be used to cheaply produce high quality videos for training, particularly in situations where it would be dangerous or otherwise impossible to get a camera crew in to do the shoot. 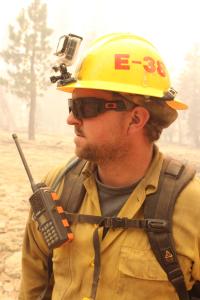 For the last several years, I’ve been working on developing and maintaining both classroom and eLearning programs that train propane industry employees all over the country. I could immediately see a ton of applications for shooting video this way that would have been difficult and/or cost prohibitive before.  These amazing little cameras are cheap, easy to use, produce high quality video, and best of all, hands-free. I can see endless possibilities that I had never really considered before.

What about you? Do you use video in your programs, and if so, how do you produce them? How do you make decisions about when and how to use video? Have you ever used or considered using GoPros for shooting your videos? Join us on October 22nd, 8:00am PDT, 11:00am EDT, 4:00pm BST for a #chat2lrn discussing these and other questions.